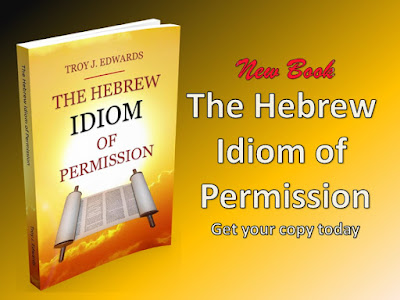 Feed on the Word by R.A. Torrey 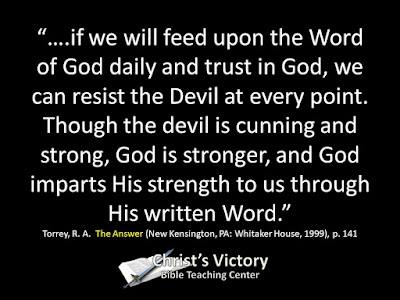 Are You Willing to Be Healed? 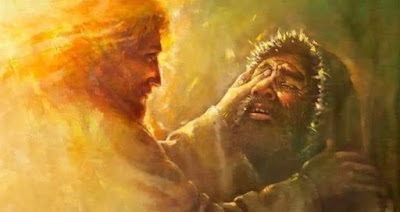 Are You Willing to Be Healed?
By Troy J. Edwards
And a certain man was there, which had an infirmity thirty and eight years. When Jesus saw him lie, and knew that he had been now a long time in that case, he saith unto him, Wilt thou be made whole? (John 5:5-6)
When it comes to supernatural healing of bodily ailments, one of the main points of contention among believers is God’s will. The following is a summary of the debate:
Those who are familiar with our ministry know that I support the third viewpoint, and I have ample teaching in the form of books and videos to support my position. Jesus confirmed it. In my opinion, Jesus answered the question once and for all in His interaction with a leper:
And there came a leper to him, beseeching him, and kneeling down to him, and saying unto him, If thou wilt, thou canst make me clean. And Jesus, moved with compassion, put forth his hand, and touched him, and saith unto him, I will; be thou clean. (Mark 1:40-41)
Jesus was the “will of God” in action (John 5:19; 8:38; 14:7-11; Acts 10:38). He said, “…. I seek not mine own will, but the will of the Father which hath sent me” (John 5:30b). The life, words, and actions of Jesus sufficiently demonstrate that it is God’s will to heal today and it is His will to heal all (Matt. 4:24; 8:16; 12:15; Acts 10:34, 35, 38).
The true question to be asked is not about God’s willingness, but about our own willingness. It’s no longer a question of whether or not it’s God’s will for you to be healed: instead, God wants to know if it’s your will to be healed. We can see how Jesus had to incorporate this man's will in the process in John 5:5-6.
Regardless of what God was willing to do, the man had to accept it. God is willing to accomplish a lot of things, but He will not do them against our will. Jesus clarifies once more:
O Jerusalem, Jerusalem, thou that killest the prophets, and stonest them which are sent unto thee, how often would I have gathered thy children together, even as a hen gathereth her chickens under her wings, and ye would not! (Matt. 23:37)
Jesus offered to safeguard Jerusalem from the threats they were facing, but they turned Him down. God may want to intervene in our lives, but He will not kick down our closed doors or try to force His will through clinched teeth (Rev. 3:20; Psalm 81:10-16). As a result, the issue with divine healing is not one of God’s will; rather, it is one of ours.
God will not intervene if we want to hold on to concepts about miracles vanishing or Calvinistically influenced ideas about God’s sovereignty in which God is believed to play favorites (and save your breath with the standard assertion that “he just doesn't understand Calvinism”). He respects our right to make our own decisions far too much to do so (Deut. 30:15, 19; Isa. 1:18-20). As a result, the first step in receiving healing is to comprehend both God's willingness to heal and your willingness to be healed.
===================================================
Visit our web page:
www.vindicatinggod.org
Like us on Facebook:
https://www.facebook.com/vindicatinggod/
Follow us on Gab.com
https://gab.com/victoriousword
Subscribe to us on Minds.com:
https://www.minds.com/victoriousword/
Become a Contact with me on MeWe:
https://mewe.com/i/troyedwards15
Subscribe to our YouTube channel:
https://www.youtube.com/channel/UCXn0mUpckKTDhLiRiR5PIJg
Posted by Christ's Victory Bible Teaching Center at 5:28 AM No comments: 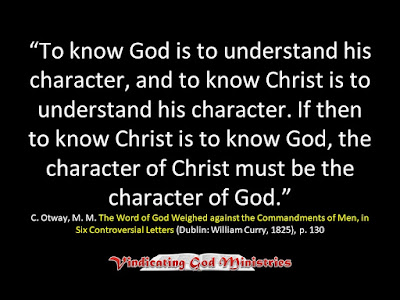 Because the Lord Would Slay Them (Part 2) 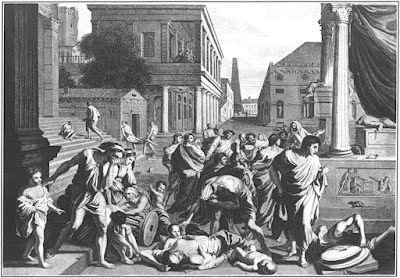 All of this could have been avoided. God would have subdued their enemies if Eli and his two sons had heeded to God's voice rather than their own counsel (Psalm 81:10-15). They lost God’s protection because they refused to walk in God’s ways.
According to this evidence, the latter part of 1 Samuel 2:25 should be read in a permissive rather than a causative sense: “Notwithstanding they hearkened not unto the voice of their father, therefore the LORD would permit their enemies to slay them.” This is consistent with the full tenor of Scripture as well as with the truth about God’s loving character in which He does no harm.

Because the Lord Would Slay Them (Part 1)

Does God Elect Only a Few for Salvation? (Part 2) 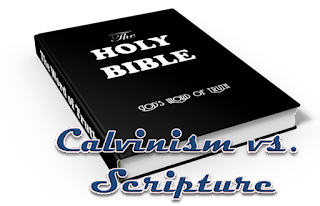 Calvinist Proof-Texts Answered
“According as he hath chosen us in him before the foundation of the world, that we should be holy and without blame before him in love.” (Eph. 1:4)
Does God Elect Only a Few for Salvation? (Part 2)
Commentary: The “in Him” in Eph. 1:4 is a reference to corporate election, just as Israel as a corporate entity was chosen by God. Sadly, Calvinists have redefined the word “chosen” to include an irresistible connotation. In his comments on Eph. 1:4, Herschel H. Hobbs describes this choosing or election as simply God "taking the initiative." Hobbs writes, "But initiative does not mean fatalism." (Studies in Ephesians: New Men in Christ, p. 15).

This is important because Peter uses the same language from the Old Testament concerning Israel to describe God’s choosing of those “in Christ” (1 Peter 2:4, 9). Since God’s election works in the same manner as with Israel, anyone can become a part of the chosen if they will simply believe and accept the redemptive work of Christ. Similarly, any of the chosen can reject Christ. 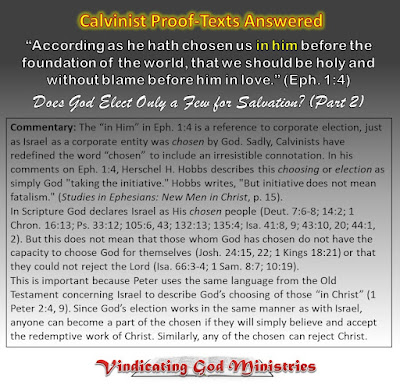