While doing some research for a book that I am writing on the open view of the future, I found a quote about "God repenting" in the Bible from an 1865 Bible commentary that I thought was very interesting and wanted to share:

"God is often spoken of in the Scriptures as repenting, —as, for example, at the flood, (Gen. vi. 6,) and during the sojourn of the Israelites in the wilderness, (Exod. xxxii. 14;)—while, on other occasions, it is said that “God is not the son of man, that he should repent,” (Num. xxiii. 19,) and, in Rom. xi. 29, “that the gifts and calling of God are without repentance.” We may here remark how false and unfair that method of interpreting the Scriptures is, in which one class of passages—that which each considers favourable to his own peculiar views—is adduced and dwelt upon, while others, which he regards as unfavourable, are passed by unnoticed. In order that the whole truth may be elicited, both classes of passages should be examined and compared with each other. In accordance with the passages just quoted, it is as erroneous to say that God cannot repent of anything as simply to ascribe to him human repentance."
Barth, Christian Gottlob The Bible Manual: An Expository and Practical Commentary on the Books of Scripture (London: James Nisbet and Company, 1865), pp. 405, 406


Now, this does not mean that the author of this commentary was an open theist (and seriously doubt that anyone was labeled such a thing back then anyway). It is possible that the person held to a strict Arminian view of God's foreknowledge. The quote is only to say that there were some theologians, even in the earlier centuries, who did not buy into the idea that Scripture does not mean what it says when it says that God "repents" or "changes His mind".

Christmas and Why Jesus Came: The Character of God

CHRISTMAS AND WHY JESUS CAME: THE CHARACTER OF GOD
"And we know that the Son of God is come, and hath given us an understanding, THAT WE MAY KNOW HIM that is true, and we are in him that is true, even in his Son Jesus Christ. This is the true God, and eternal life." (1 John 5:20)
The good thing about Christians is that, most times, we remember why we have taken what some say is a pagan holiday and redeemed it to celebrate our Lord, Yeshua the Messiah, coming to earth as a man. Quite often though, the emphasis is upon His sacrifice for us.
While it is good to keep this at the forefront, also remember that one of His main purposes was to reveal the truth about a loving, caring, Heavenly Father. Lies have been spread about God since the beginning of man's existence and Jesus came to set things straight, to give us an understanding about God's true character. Let me leave you with a quote from a great classic author on prayer.
“The Revelation of the Father was His work. We have been taught to think, many of us, of His Atoning Work, of His Death, as the one feature upon which it is good to dwell. Such teaching gives us a wrong perspective. Before we can wish to be reconciled, we must know the Being to Whom we are to be reconciled. To know God is our first demand, and so the Revelation of the Father is the first work of Christ.” – Eyton, Robert The Lord’s Prayer: Sermons (London: Kegan Paul, Trench, Trubner & Co., LTD), p. 29
Posted by Christ's Victory Bible Teaching Center at 12:45 PM No comments: 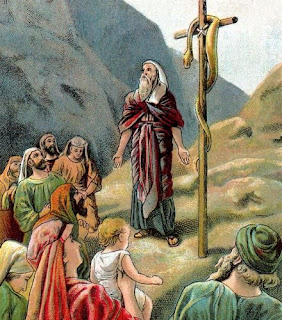 “And the people spake against God, and against Moses, Wherefore have ye brought us up out of Egypt to die in the wilderness? for there is no bread, neither is there any water; and our soul loatheth this light bread. And the LORD sent fiery serpents among the people, and they bit the people; and much people of Israel died.” (Numbers 21:5-6)

Did God, using His divine power, actively place and irresistible influence upon these poisonous serpents to harm His people? Many believe that He did and some even believe that it is justified. This is an understandable conclusion from the text but it certainly does not give us the best picture of the God who commanded us to love our enemies as He loves His (Matt. 5:44-46).
The Bible is the divinely inspired and inerrant Word of God so the passage itself is not in dispute. However, our interpretation of such passages are always subject to scrutiny. A better interpretation of Numbers 21:5-6 which is more in sync with our Lord Jesus’ revelation of the Father-heart of God can be determined how the word “sent” is correctly translated.
“Sent” is from the Hebrew word “shâlach” which, according to Joseph Rotherham, “It often takes the modifications expressed by permit, to declare or hold and, to help.”[1] When the people spake against Moses and God they literally moved themselves out of the realm in which God could legally protect them. He had no other choice but to permit Satan to have his way and influence these snakes to attack God’s people (see 1 Cor. 10:8-10).
I have dealt with this subject in several of my books but recently while browsing through one of my favorite Bible commentaries by one of my favorite classic preachers, Albert Benjamin Simpson (1843-1919), I found these fascinating comments on Numbers 21:6:

The venomous snakes, which were permitted to torment them on account of their murmurings, represent the Satanic visitations of spiritual or physical evil which come as the result of disobedience and unbelief. “The LORD sent venomous snakes among them; they bit the people and many Israelites died” (Numbers 21:6).
There is such a thing as temptation befalling the spirit through the divine permission on account of sin. The Scriptures speak of persons being delivered over to a reprobate mind (Romans 1:28), and souls that have been delivered unto Satan for the destruction of the flesh, “and his spirit saved on the day of the Lord” (1 Corinthians 5:5).
No path is so beset with temptation as the path of cowardice and disobedience. And no souls walk in such a victory over the power of the enemy as those who dare to go forward in full obedience to all the law of God and trample on the power of serpents and scorpions. The only place where we can have power over Satan, is beneath our feet. Our attitude must be constant victory and defiance, or it will be constant harassment and torment.
This terrible visitation, however, led ultimately to a more glorious manifestation of the grace of God. And so, often, the temptations of life can be overruled for spiritual discipline and final victory. So Christ refers especially to the temptations in the wilderness, as the result of sin (1 Corinthians 10:9-10), and uses their example for our warning against all evil. But at the same time He encourages us with the most gracious promises of deliverance and protection, if we abide in humble, vigilant faith and obedience (10:12-13).[2]

Simpson taught that this serpent attack was not instituted by God but permitted by Him when the people removed themselves from under God’s protection. He compares this to how Christians today sin and then open the door for the devil in their lives. God delivers people over to the master they choose to follow if they insist upon rejecting Christ and following another.
When we submit to God, Simpson points out that these things can be overruled by God for the purposes victory in our lives. God neither instigates or desires these things to come upon us but when we open ourselves up to them, and repent after seeing the error of our ways, God can then teach us from them.
Finally, Simpson emphasizes the truth that we can walk in constant victory over Satan and his attacks if we will remain obedient to God’s Word. We can then exercise our authority over evil forces. Excellent teaching from one of God’s great servants of bygone days.

Having difficulty understanding Bible passages that make God appear to vindictive and cruel? We highly recommend the following books: 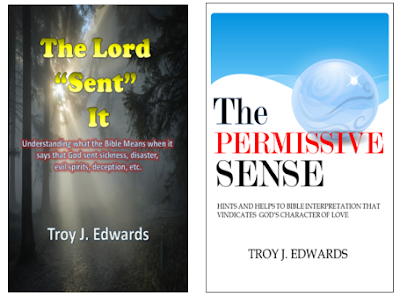 Subscribe to our YouTube channel:
https://www.youtube.com/channel/UCXn0mUpckKTDhLiRiR5PIJg
Posted by Christ's Victory Bible Teaching Center at 7:56 AM No comments:

The Reason for Misery and Pain by Brother Andrew

"As Christians we know as well that the pain and misery in this world are not God's doing or His choice. He suffers with us, and ultimately suffered for us, but He never wants us to suffer. Out of love, He gave us the freedom to say yes or no to His just and righteous will, and to the extent that we've said no, we have permitted the forces of evil to wreak havoc upon our world. The suffering we experience is the natural consequence of ungodly behavior--either our own or that of others. As humans, we are the authors of our own misery. God alone is the author of love."
"And God Changed His Mind" by Brother Andrew, p. 39

Subscribe to our YouTube channel:
https://www.youtube.com/channel/UCXn0mUpckKTDhLiRiR5PIJg
Posted by Christ's Victory Bible Teaching Center at 5:46 AM No comments: