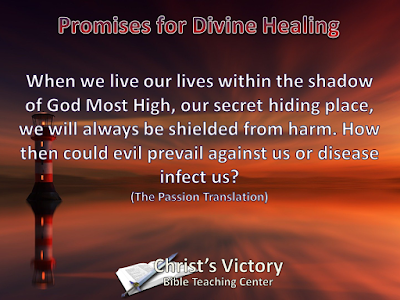 When we live our lives within the shadow of God Most High, our secret hiding place, we will always be shielded from harm. How then could evil prevail against us or disease infect us?
(The Passion Translation)

Subscribe to our YouTube channel:
https://www.youtube.com/channel/UCXn0mUpckKTDhLiRiR5PIJg
Posted by Christ's Victory Bible Teaching Center at 3:30 AM No comments: 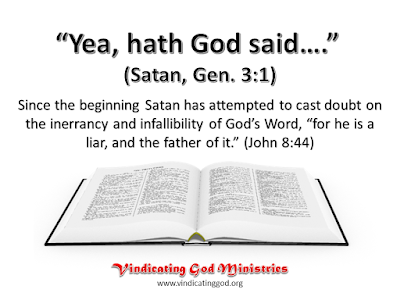 Posted by Christ's Victory Bible Teaching Center at 6:05 AM No comments:

The Chastening of God (Part 2)

Posted by Christ's Victory Bible Teaching Center at 7:03 AM No comments:

Questioning the Bible as God's Word

There is a revival in our time of the idea that God's written Word, the Bible, is errant and imperfect. History has shown that when you question the inspiration, infallibility & inerrancy of the Bible as God's Word, this leads to questioning the virgin birth, the resurrection of Christ, His deity, and that Jesus is the ONLY means to salvation as well as other important doctrines essential to our salvation. 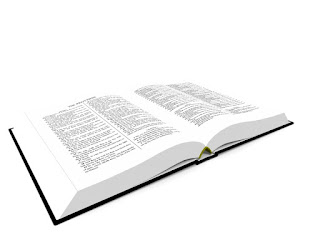 Subscribe to our YouTube channel:
https://www.youtube.com/channel/UCXn0mUpckKTDhLiRiR5PIJ
Posted by Christ's Victory Bible Teaching Center at 6:04 AM No comments:

The Curse Pronounced in Eden

I have been reading a book titled, "The Violence of the Biblical God" by L. Daniel Hawk. I found his understanding of the curses pronounced to Adam, Eve and the serpent in Genesis 3 intriguing:

"Yahweh's response to the serpent, the woman, and the man has traditionally been interpreted as laying out the punishment for each of the offending creatures.... it seems better to read Yahweh's words more as description than decree. That is, Yahweh's words elaborate the contours of the world that the aspiring deities make for themselves.... The world that humans will make is incompatible with the world the Creator called good." (p. 28)

I have always believed this as well though Hawk articulates it better than me. Because God gave man dominion over His creation (Gen. 1:26-28) then man was the one who brought into the world sin and its results (Rom. 5:12). God is not to be blamed as if He supernaturally caused the curse to come upon the ground, the pain of child-birth upon the woman or the serpent to crawl. The results of the curse are built into to a system that decides to push God out. 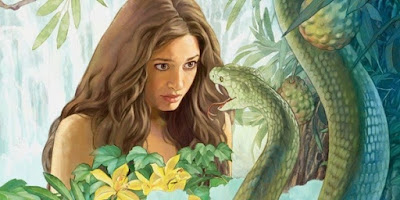 Posted by Christ's Victory Bible Teaching Center at 6:04 AM No comments:

The Chastening of God (Part 1)


Posted by Christ's Victory Bible Teaching Center at 6:52 AM No comments:

Cotton Mather on The Destroyer in the Wilderness

Cotton Mather on The Destroyer in the Wilderness

A free printable .pdf version of this article can be downloaded here

And Aaron took as Moses commanded, and ran into the midst of the congregation; and, behold, the plague was begun among the people: and he put on incense, and made an atonement for the people. And he stood between the dead and the living; and the plague was stayed. (Num. 16:47-48)

There are some passages of Scripture that leave us with no doubt that Satan and his demonic entities are involved in the sickness and diseases suffered in our fallen world (Job 2:7; Matt. 12:22-29; Luke 13:10-17; Acts 10:38; 1 Cor. 5:5).
However, there are some passages that are not as clear on this matter such as our opening passage. On the contrary, the context of the passage implies that God is the source of this plague. Verse 46 says, “for there is wrath gone out from the LORD; the plague is begun.”
An often-neglected principle for understanding the Bible is that it is a progressive revelation. Because all that was to be known about God and the invisible spiritual world was not revealed in the early days when Scripture was being written, God often took responsibility for things He did not have a direct hand in (compare 2 Samuel 24:1 with the later written 1 Chronicles 21:1). An Hebrew idiom that should always guide our interpretation is that God is often said to do that which He permitted or did not prevent.
Centuries later Paul taught that there was another agent outside of God Himself who was responsible for the plague in Numbers 16: “Neither murmur ye, as some of them also murmured, and were destroyed of the destroyer” (1 Cor. 10:10). Nonetheless, this passage still appears obscure to some.
There are those who believe that the passage is in reference to an agent (possibly an angel) who is under God’s employ, who brings about the plague. This may seem plausible to some, but it is inconsistent with how Jesus, who is the express image of God’s character and nature (2 Cor. 4:4), revealed about Satan and his works. Therefore, in consistency with Scripture’s revelation that Satan is the author of sickness and disease, we believe that the “destroyer” referenced by Paul in 1 Cor. 10:10 is the devil.
Cotton Mather, probably more famous for his involvement in the Salem witch trials that occurred during his day, was a Puritan minister, author and scientist, born on February 12, 1663 and lived to February 13, 1728.
Mather gave a sermon titled, “A Discourse on the Wonders of the Invisible World”. In this sermon, Mather believed that that Satan is the destroyer mentioned in 1 Corinthians 10:10 and that he was the culprit behind sickness and disease:

Indeed, as the Devil does begrutch us all manner of Good, so he does annoy us with all manner of Wo, as often as he finds himself capable of doing it. But shall we mention some of the special woes with which the Devil does usually infest the World! Briefly then; Plagues are some of those woes with which the Devil troubles us. It is said of the Israelites, in 1 Cor. 10.10. They were destroyed of the destroyer. That is, they had the Plague among them. ‘Tis the Destroyer, or the Devil, that scatters Plagues about the World. Pestilential and Contagious Diseases, 'tis the Devil who does oftentimes invade us with them.[1]

Mather, who also promoted inoculation for disease prevention, believe that Satan was completely responsible for the sickness and disease that had spread during his time:

‘Tis no uneasy thing for the Devil to impregnate the Air about us, with such Malignant Salts as meeting with the Salt, of our Microcosm, shall immediately cast us into that Fermentation and Putrefaction, which will utterly dissolve all the Vital Tyes within us; Ev'n as an Aqua-Fortis, made with a conjunction of Nitre and Vitriol, Corrodes what it Seizes upon. And when the Devil has raised those Arsenical Fumes, which become Venomous Quivers full of Terrible Arrows, how easily can he shoot the deleterious Miasmas into those Juices or Bowels of Mens Bodies, which will soon Enflame them with a Mortal Fire! Hence come such Plagues, as that Beesom of Destruction, which within our memory swept away such a Throng of People from one English City in one Visitation; And hence those Infectious Fevers, which are but so many Disguised Plagues among us, causing Epidemical Desolations.[2]

Whatever issues one might have with Mather’s involvement in the Salem witch trials, it is nice to know that the understanding that Satan is the destroyer referred to in 1 Cor. 10:10 and that he is the actual propagator of sickness and disease in the Old Testament (as well as that of today) is not a modern day teaching.
Sickness does not originate with God but with the enemy of God and mankind. It should never be accepted as coming from God nor should we ever consider that it is His will that we are sick. Sickness and disease must be resisted by faith in the promises of divine healing found in His Word (Exodus 23:25-26; Psalm 103:1-5; Mark 16:15-20; James 5:14-16).

Learn more truth about how to interpret difficult passages of Scripture that appear to cast God in a bad light. Get our upcoming new and revised books: 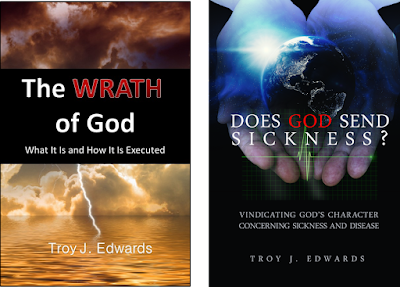 [1] Mather, Cotton The Wonders of the Invisible World: Being an Account of the Tryals of Several Witches Lately Executed in New-England (Massachusetts: John Russell Smith, 1862), p. 52
[2] Ibid.

Subscribe to our YouTube channel:
https://www.youtube.com/channel/UCXn0mUpckKTDhLiRiR5PIJ
Posted by Christ's Victory Bible Teaching Center at 4:58 AM No comments: