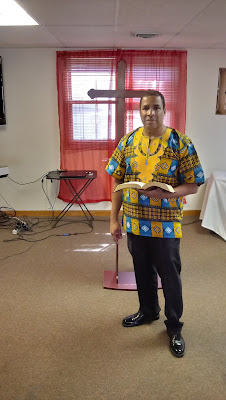 Get a printable .pdf copy of this article here

In our weekly Bible studies at our church we have been dealing with the subject of evangelism. Particularly, we have been looking at excuses used by sinners to reject Jesus as their Lord and Savior. While gathering together the passages of Scripture to help our students evangelize self-righteous people (or “I’m a good person” person) I ran across the following passage:

Again, When a righteous man doth turn from his righteousness, and commit iniquity, and I lay a stumbling-block before him, he shall die: because thou hast not given him warning, he shall die in his sin, and his righteousness which he hath done shall not be remembered; but his blood will I require at thine hand. (Ezekiel 3:20)

I have read this passage a number of times. Its declaration on the fact that when a “righteous” person sins all his previous righteousness will be forgotten was a good fit for dealing with the self-righteous sinner. Yet, it also demonstrates how superficially we all read Scripture. In all of these years I had never noticed the portion about God laying a stumbling block before the person in order to bring about his demise.

Of course, the extreme Calvinist is right at home with such a passage. The Calvinist’s deity is one who sovereignly controls every single event and ensures that it comes to pass. The extreme Calvinist believes that God is the cause of each person’s sin (though he holds the sinner responsible for the act that the sinner committed). However, this is troubling for the Bible-believing Christian who is not committed to a theologically deranged idea about God’s sovereignty and believes that God is truly good, kind, and holy.

After reading how God Himself claims to put a stumbling block before the sinner I put the evangelistic Bible study aside for a moment to investigate this further (After all, one area of my ministry is to vindicate God against the false charges of being arbitrary, vindictive, and cruel).

One of the first things I did was to compare the King James Version to other translations. Sadly, some of them made God appear to be even worse than the KJV translators depict Him. For example, the Easy to Read Version says, “If good people stop being good and begin to do evil, and I send something that makes them stumble and sin, they will die because they sinned.” This rendering makes it appear as if God sends things just to cause people to sin.

If that isn’t clear enough the International Children’s Bible reads, “He may do evil. If I caused him to sin, he will die. Because you have not warned him, he will die because of his sin.” Now when our children sin they can point to this passage and say that God caused them to do it because He wanted them dead. That’s enough to make even an atheist blush.

The Good News Translation does slightly better: “If someone truly good starts doing evil and I put him in a dangerous situation, he will die if you do not warn him.” Well, at least it does not render the passage in a way that makes God the active cause of a person sinning. It only turns God into a killer by having him place people into dangerous situations. While the idea of God directly punishing a sinner by personally placing him in danger is more acceptable to the majority of Christians, it does not fit with the overall picture of the God presented to us by Jesus the Messiah.

Yet, Ezekiel 3:20 is the inspired Word of God and it cannot be ignored. But, one can get a better understanding of such passages than the ones presented by the majority of English Bible translations. For instance, a better interpretation is found in the Amplified Bible which attributes personal responsibility to the one who has fallen into sin:

Again, if a righteous man turns from his righteousness (right doing and right standing with God) and some gift or providence which I lay before him he perverts into an occasion to sin and he commits iniquity, he shall die; because you have not given him warning, he shall die in his sin and his righteous deeds which he has done shall not be remembered, but his blood will I require at your hand. (Amplified Bible)

I like this interpretation of Ezekiel 3:20. It fits well with the rest of Scripture’s understanding of how God mercifully reacts to the sinner. God attempts to bless the sinner but it is the sinner who perverts this blessing, thereby, bringing about his own demise (James 1:13-15; 1 John 2:15-16).

Nonetheless, I am not an expert in original Bible languages and cannot confidently affirm that the Amplified Bible’s rendering is the most accurate one. Its accuracy is only affirmed by its consistency with God’s character as revealed in other portions of Scripture. While this is sufficient for my comfort and understanding of my loving Heavenly Father, others may need, what they believe to be, more concrete evidence.

To provide this evidence we only need to look to the permissive sense. J. B. Rotherham’s literally translated The Emphasized Bible has very often been helpful in demonstrating the truth of this principle. Note his rendering of Ezekiel 3:20:

And when a righteous man hath turned from his righteousness, and committed perversity, and I have suffered a stumbling- block to be laid before him he shall die, —though thou hast not warned him, in his sin I shall he die, neither shall be remembered his righteous deeds which he hath done, but his blood, at thy hand will I require.

In Rotherham’s literal translation we are told that God suffered a stumbling block. The word “suffered” is an archaic word meaning “allowed” or “permitted”. In the Old Testament God is often said to have done that which He allowed or permitted (or did not use His divine power to prevent from happening) by virtue of the fact that a person has removed himself or herself from under God’s protective presence. This permissive sense application of Ezekiel 3:20 is backed by a few Bible commentators and scholars:

“A stumbling block, leaving him to his own lusts, and suffering him to fall thereby.”
Cobbin, Ingram Condensed Commentary and Family Exposition of the Holy Bible (London: Thomas Ward and Company, 1837), p. 853

“Every man in the last hour of his life trips over a stumbling-block—which God sees, and permits to remain—and falls into the grave.”
Cobern, Camden M. Commentary on the Old Testament, Volume 8 (New York: Phillips & Hunt, 1901), p. 61

“That is, I permit him to be tried, and he fall in the trial. God is repeatedly represented as doing things which he only permits to be done. He lays a stumbling-block, i.e., he permits one to be laid.”
Clarke, Adam The Holy Bible, containing the Old and New Testaments (New York: Lane & Scott for the Methodist Episcopal Church, 1850), p. 434

This settles the problem, does it not? God does not literally put stumbling blocks (temptations to sin or dangers as punishment for sin) but simply ceases to protect the sinner when he or she persists in his or her sin.

This should settle the issue. But, while doing my Bible cross references for Ezekiel 3:20 I ran across Jeremiah 6:21 where again God claims to personally lay stumbling blocks: “Therefore thus saith the Lord, Behold, I will lay stumblingblocks before this people, and the fathers and the sons together shall fall upon them; the neighbour and his friend shall perish.” I have no doubt that my critics would use this passage as one of their, “Ah ha, Gotcha” moments if I do not deal with it.

We must always keep in mind that these stumbling blocks that are said to be laid by God are really those of man’s own making. As James Burton Coffman says in his commentary on the passage:

“There was nothing capricious or vindictive on God's part who is represented here as placing ‘stumbling blocks’ in the way of Israel. ‘The stumbling blocks confronting the people were of their own making,’ when they had deliberately refused to walk in the good way (v. 17).”
Coffman, James Burton. “Commentary on Jeremiah 6”. “Coffman Commentaries on the Old and New Testament”. <http://classic.studylight.org/com/bcc/view.cgi?book=jer&chapter=006>. Abilene Christian University Press, Abilene, Texas, USA. 1983-1999.

If Coffman’s understanding is accepted then, like Ezekiel 3:20, we can understand Jeremiah 6:21 from the permissive sense as well. Dr. Jack Blanco offers us this paraphrase of Jeremiah 6:21 in his book, “The Clear Word:”

“The Lord said, ‘I will let such troubles come on my people that both parents and children will stumble and fall, and neighbors and friends will perish” (emphasis are mine)

The permissive sense is the best sense in which to approach such passages in the light of God’s loving and merciful character by which He does not personally act to harm the sinner. Finally, the insight from an older book is very helpful in this regard:

“‘Behold, I will lay stumbling-blocks before this people, and . . . they shall perish’ (Jer. vi. 21), it should be understood that these evils, though affirmed of God (because they exist by His permission), are really ‘the fruit of man's own thoughts,’ through not hearkening to, but rejecting, God's words, statutes, and judgments, which thus become stumblingblocks and a curse, in place of the blessing for which they were intended; for God recompenseth not evil for evil, but good for evil, ‘making His sun to rise on the evil and on the good.’ In like manner, when we read of God, that “He that made them will not have mercy upon them, and He that formed them will show them no favour' (Isaiah xxvii. 11), it should be understood that this unmercifulness arises not out of God’s, but out of man’s will, who closes the door to God’s mercy and forgiveness by opposing God’s laws, and so deprives himself of the blessing they are designed to fulfil. Man will not ‘take hold of God’s strength that he may receive pardon and peace (5), for the moment he did so, he would find that in place of a God of wrath, He was a God of peace; ‘a God that pardoneth iniquity . . . that retaineth not his anger for ever, because He delighteth in mercy’ (Micah vii. 18); and blotteth out as a thick cloud transgression and sin (Isaiah xliv. 22). These, and all similar passages, are to be understood as solely bearing reference to man’s reciprocation—perverse reciprocation—of the life of God, and not to the life and will of God Himself.”
Jennet, E. The Man: the Mighty God. Outlines of Thought (London: Longmans, Green and Company, 1871), pp. 210, 211

Ezekiel 3:20 and Jeremiah 6:21 can be understood in the light of God’s love and mercy for the sinner. Unless one prefers to hold to a false theological perspective that makes God the divine dispenser of sin and disasters, one should have no problems seeing that such passages are to be understood as God respecting man’s freedom to choose against His wishes and reluctantly permitting him to suffer the consequences of that rebellion. 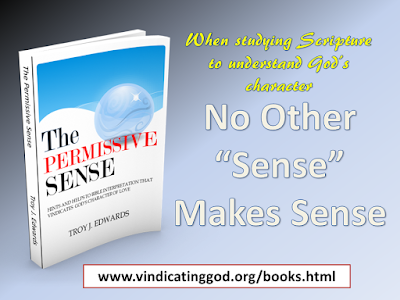 Subscribe to our YouTube channel:
https://www.youtube.com/channel/UCXn0mUpckKTDhLiRiR5PIJg
Posted by Christ's Victory Bible Teaching Center at 1:38 AM No comments:

How Does God Punish? (Meme) 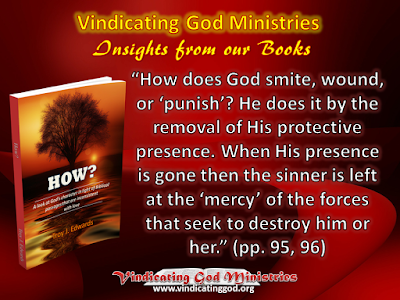 “How does God smite, wound, or ‘punish’? He does it by the removal of His protective presence. When His presence is gone then the sinner is left at the ‘mercy’ of the forces that seek to destroy him or her.” (pp. 95, 96)

Posted by Christ's Victory Bible Teaching Center at 3:49 AM No comments: