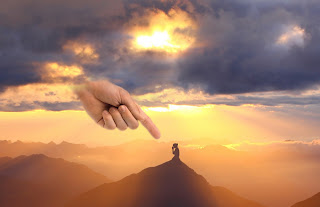 God Taking Responsibility in the Old Testament
By Troy J. Edwards
A printable. pdf version of this blog is available here
Let no man say when he is tempted, I am tempted of God: for God cannot be tempted with evil, neither tempteth he any man (James 1:13)
As most of us are aware, the Bible, though a divinely inspired book, has some troubling passages. Scripture reveals that God is loving, merciful, kind, gracious, forgiving, patient, longsuffering, etc. We learn that He hates evil and is compassionate towards those who suffer from it. But then we are told in this very same book that He afflicts with sickness and disease, brings disaster, deceives, tempts, gives people evil spirits, creates evil, hardens hearts, moves men to do evil, etc.
The way to rectify these apparent contradictions has been to understand what scholars have coined “the permissive sense”. That is, to understand the passages that make God appear to be harsh and cruel were things that were not directly caused by God but simply not prevented by Him for various reasons.
In conjunction with the permissive sense is to also understand the Bible as a progressive revelation. In the earlier times in which Scripture was written, due to Israel’s weakness for constantly slipping into idolatry, it would have done more harm than good to reveal too much knowledge about Satan’s activities. Therefore, God often took responsibility for actions that He would later reveal were actually Satan’s doing (compare 2 Samuel 24:1 and 1 Chronicles 21:1).
With that said, I recently ran across a commentary on James 1:13 by Dr. Peter H. Davids that sheds more light on this subject:
But what about “God does not tempt [test] anyone”? To deal with this problem we must consider the development of doctrine within and between the testaments. Old Testament Hebrews, at least in their earlier period, traced all events directly back to God. Whatever happened, God caused it. This level of revelation was quite appropriate, since God’s first task with Israel was to convince them that there was only one God for them to worship. Beginning late in the Old Testament, however, and continuing into the intertestamental period, it became clear that other beings often actually caused the test.[1]
When we learn to keep this truth in our minds as we are reading Scripture, we will be careful not to read into it the false ideas that God is actually the author of sickness, disaster, and other evils.
=============================================
We have a couple of videos addressing this issue that we highly recommend. Click on the links below to watch:
The Progressive Revelation of Satan (Part 1)
The Progressive Revelation of Satan (Part 2)
We also recommend our book, The Bible Principle of Accommodation, where we have two chapters on this subject. Also, be on the lookout for our upcoming book, “God Taking Responsibility for Satan’s Work: Understanding Bible Passages that Question God’s Character”. 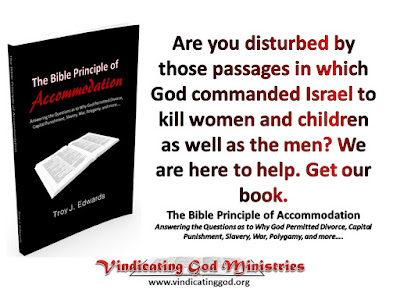 Posted by Christ's Victory Bible Teaching Center at 3:43 AM