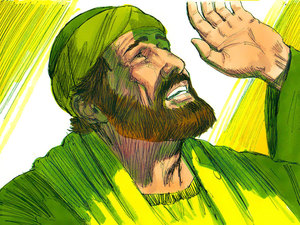 Did Jesus Blind Paul?
And Does this Prove that God Inflicts Sickness?


A printable .pdf version of this article can be found here

It is well-known by the most casual Bible reader (or church attendee) that Paul was an enemy of the church before becoming one of the greatest servants of Jesus Christ. Furthermore, most are familiar with the circumstances of his conversion. However, let us refer to Luke’s account as a reminder:

Acts 9:1-9
1  And Saul, yet breathing out threatenings and slaughter against the disciples of the Lord, went unto the high priest,
2  And desired of him letters to Damascus to the synagogues, that if he found any of this way, whether they were men or women, he might bring them bound unto Jerusalem.
3  And as he journeyed, he came near Damascus: and suddenly there shined round about him a light from heaven:
4  And he fell to the earth, and heard a voice saying unto him, Saul, Saul, why persecutest thou me?
5  And he said, Who art thou, Lord? And the Lord said, I am Jesus whom thou persecutest: it is hard for thee to kick against the pricks.
:6  And he trembling and astonished said, Lord, what wilt thou have me to do? And the Lord said unto him, Arise, and go into the city, and it shall be told thee what thou must do.
7  And the men which journeyed with him stood speechless, hearing a voice, but seeing no man.
8  And Saul arose from the earth; and when his eyes were opened, he saw no man: but they led him by the hand, and brought him into Damascus.
9  And he was three days without sight, and neither did eat nor drink.

There is no telling what revelation and insight we would have missed if Paul had not had this experience. Paul became history’s most dedicated and lifelong servant of Christ. He contributed to over two-thirds of the New Testament and his divinely inspired letters are the most read and most taught within the modern church.

A Natural Reaction to Bright Light
However, I am often more perplexed by how some use the account of Paul’s experience to teach their pet doctrine that God is the afflicter of sickness and disease. Some theologians refer to this account to proclaim the idea that God directly afflicts people with sickness and handicaps, that sickness is His will, and that He has a purpose in it. Atheists like to refer to this passage to show how cruel the God of the Bible is in order to excuse their hateful vendetta against Him.
Listening to these people would lead one to believe that it was Jesus primary intention to blind Paul despite there being no evidence of such intent. In Acts 9 we are given two simple facts:

In a later account Paul explains that it was indeed due to the glory of that light that He was unable to see:

And when I could not see for the glory of that light, being led by the hand of them that were with me, I came into Damascus. (Acts 22:11)

Some things that are not said in Scripture are just as important as what is said. Notice that Paul did not say, “God appeared to me and blinded me in order to humble me.” Paul simply stated that Christ appeared in His bright glory and as a natural (rather than “intentional”) consequence of that glory he was blinded.

Medical Science and “Flash Blindness”
Paul never accused God of intentionally blinding him though we do not doubt that God was aware of how the manifestation of His glory would affect Paul’s sight. A quick search of the internet concerning “light causing blindness” yields a number of web pages that explain a term called, “flash blindness.”
One dictionary explains that “flash blindness” is, “Impairment of vision resulting from an intense flash of light. It includes temporary or permanent loss of visual functions and may be associated with retinal burns” (Dictionary of Military and Associated Terms). WebMD, in their, “Corneal Flash Burns Overview” further explain:

Eyes, particularly the cornea (the clear window of tissue on the front of the eyeball), can be damaged easily by exposure to ultraviolet radiation from the sun and from other sources of ultraviolet light, such as a welder's arc, a photographer's flood lamps, a sun lamp, or even a halogen desk lamp. The cornea takes the brunt of the damage if proper eye protection is not worn, such as dark glasses or goggles while skiing in bright sun. A corneal flash burn (also called ultraviolet keratitis) can be considered to be a sunburn of the eye surface. – https://www.webmd.com/eye-health/corneal-flash-burns#1 (Last accessed: April 15, 2020)

Certainly, Paul was blinded by this light and suffered what modern medical professionals refer to as “flash blindness”. This also explains the statement in Acts 9:18 when after his healing, “there fell from his eyes as it had been scales” or, as another translation reads, “something like scales fell from Saul’s eyes” (An Understandable Version).
In his commentary on Acts 9:18 Adam Clarke writes, “he had been so dazzled with the brightness of the light that we may suppose the globe of the eye, and particularly the cornea, had suffered considerable injury” (Adam Clarke’s Commentary on the Bible). Clarke then explains that after Paul’s healing, “the opaque matter separated from the cornea, in the form of thin laminae or scales.” Regardless, these were not literal scales. Albert Barnes writes:

“As the blindness had been caused by the natural effect of the light, probably on the optic nerve, it is manifest that no literal removing of scales would restore the vision. We are therefore to lay aside the idea of literal scales falling to the earth. No such thing is affirmed, and no such thing would have met the case.” (Albert Barnes’ Notes on the Bible)

Greek scholar, A. T. Robertson wrote, “Luke does not say that actual ‘scales’ fell from the eyes of Saul, but that it felt that way to him as his sight returned” (Word Pictures in the New Testament). Therefore, it was not as if God intentionally blinded Paul by miraculously putting scales on his eyes. All that Paul suffered was a natural reaction to the Lord’s bright glory.

Blindness is Not the Narrative’s Focus
We are told in Scripture, “…. God is light, and in him is no darkness at all” (1 John 1:5). While “light” and “dark” are primarily metaphorical references (“good” and “evil”) they also tell us how God will manifest Himself in a physical form. When He appears to the sinful human being, He appears as light which can be blinding, thus causing “flash blindness”.
But do we find anything in the account to support the idea that all blindness and other handicaps are distributed by God? There are many people born blind. Did God meet them inside their mother’s womb, shine His glory upon them in order to ensure their blindness?
Many other causes contribute to people becoming blind or handicapped? Yet, how does any of these connect to what happened to Paul as if the blindness of Paul is meant to be the focus of the whole story of his conversion?
The blinding of Paul is certainly not the focus. Paul relates this account to King Agrippa, but in this retelling he makes no mention of his blindness:

At midday, O king, I saw in the way a light from heaven, above the brightness of the sun, shining round about me and them which journeyed with me. (Acts 26:13)

Note that Paul says nothing about His blindness here. This is because the blindness is not the focus of the story. The focus of Paul’s story is His commission to preach the gospel to the gentiles. Paul never, ever preached about His encounter in order to make a case for God being the author of sickness, disease, and handicaps.
One should rightfully ask why “sickness is God’s will” theologians (as well as atheists) emphasize a point in this story that Paul never places a major emphasis on. Furthermore, why do these theologians draw an application from this that is never taught or intended by Paul (or Luke who recorded the account)?

Sickness and Handicaps are Not God’s Will
Finally, if this account proves that sickness and handicaps are the “will of God” then it does a very poor job of making that case.

And Ananias went his way, and entered into the house; and putting his hands on him said, Brother Saul, the Lord, even Jesus, that appeared unto thee in the way as thou camest, hath sent me, that thou mightest receive thy sight, and be filled with the Holy Ghost. And immediately there fell from his eyes as it had been scales: and he received sight forthwith, and arose, and was baptized. (Acts 9:17-18)

And one Ananias, a devout man according to the law, having a good report of all the Jews which dwelt there, Came unto me, and stood, and said unto me, Brother Saul, receive thy sight. And the same hour I looked up upon him. (Acts 22:12-13)

After only three days Paul was healed of his blindness. This is the part that the “sickness is God’s will” theologians usually don’t mention or lay any real emphasis on. There are people who have been blind or suffered from a handicap all of their lives. Paul was only blind for three days. Therefore, Paul’s story is not applicable to them.
If anything, this story proves that sickness and handicaps are not the will of God for anyone. While Paul was blinded due to the brightness of Christ’s glory (thus suffering from “flash blindness”), He was healed in three days, thus showing God’s ultimate will for Paul’s physical condition. We can conclude from this account that health and wholeness, not blindness and sickness, is the ultimate will of God for every man.

Learn more truth about passages of Scripture that appear to make God the author of sickness, disease and handicaps. Get our upcoming revised edition of our book, “Does God Send Sickness?”: 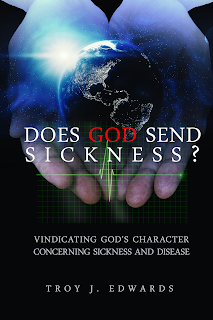