And it came to pass, when the evil spirit from God was upon Saul, that David took an harp, and played with his hand: so Saul was refreshed, and was well, and the evil spirit departed from him. (1 Samuel 16:23; KJV)

Commentary: “It only remains to say that there is need of no other agency from God than the permissive.* Satan never needs to be sent on such a mission; it is only requisite that the Lord suffer him to go. Such permission is one feature in that awful retribution which God must send upon apostate souls. They having chosen sin and rebellion rather than obedience, and, consequently, evil rather than good, God leaves them to their own guilty choice, to ‘eat the fruit of their own way, and to be filled with their own devices.’”1

Learn More: Get our book: 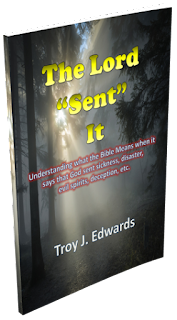