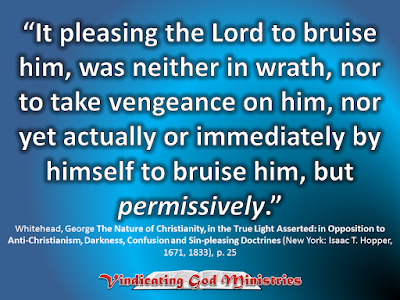 “There are still those that reject and disesteem Christ, and that esteem him smitten or plagued of God, and even to have undergone the wrath and vengeance of his Father in their stead…. Whereas, first, God had never any such wrath nor revenge, against his innocent Son, to execute upon him; nor will he so clear the guilty in their sins: 2d, It pleasing the Lord to bruise him, was neither in wrath, nor to take vengeance on him, nor yet actually or immediately by himself to bruise him, but permissively.”
Whitehead, George The Nature of Christianity, in the True Light Asserted: in Opposition to Anti-Christianism, Darkness, Confusion and Sin-pleasing Doctrines (New York: I.T. Hopper, 1833), p. 25
Posted by Christ's Victory Bible Teaching Center at 3:06 AM