The Deaths of Ananias and Sapphira

The Deaths of Ananias and Sapphira

(An Excerpt from our book, “Does God Send Sickness”)

Ananias and his wife Sapphira sold some property, gave some of the money to the church while pretending to give it all away. Peter told Ananias that he lied to the Holy Spirit. This brought God’s judgment upon him:

But Peter said, Ananias, why hath Satan filled thine heart to lie to the Holy Ghost, and to keep back part of the price of the land? Whiles it remained, was it not thine own? and after it was sold, was it not in thine own power? why hast thou conceived this thing in thine heart? thou hast not lied unto men, but unto God. And Ananias hearing these words fell down, and gave up the ghost: and great fear came on all them that heard these things (Acts 5:3-5)

Peter does not predict or inflict judgment upon Ananias as some have claimed. There is no indication that Peter even knew what would happen to Ananias until it did. After seeing what happened to Ananias Peter was able to accurately predict Sapphira’s death (Acts 5:7-10). But Peter does not claim that Sapphira’s death is the result of having been struck down by God.
Some argue that the fact that both Ananias and Sapphira died in the exact same manner proves that the death was divinely inflicted. This is not necessarily true. We live in a culture where “shame of exposure” is not the major issue that it is in more shame-based cultures such as the orient. Furthermore, we don’t seem to realize how much God actually protects us, even in our sins. It is indeed possible that both husband and wife can go through the same embarrassing shock. Add to the fact that as a result of judgment the Holy Spirit removed His protective presence (or rather, they pushed Him away), their hearts were unable to handle what this shock and fear had done to their systems and their hearts shut down on them. This is a passive judgment:

No causative agent of Ananias' death is reported beyond Ananias’ own behavior and response. Likewise with Sapphira, though she learns (from Peter) that she has tempted the Lord’s Spirit (5:9), this same Spirit—though dynamically explosive thus far in Acts—makes no retaliatory move. Sapphira is blown away by no mighty wind and burnt up by no fiery tongues; again, she simply collapses and expires.1

These scholars also write, “True, Ananias dies as he hears these words [of Peter].... but these are words of revelation and accusation, not retribution and execution.”2 When God is passive and is no longer protecting a person or nation, Satan takes advantage of the opportunity (Job 1-2; Eph. 4:26, 27; Heb. 2:14-15; 1 Pet. 5:8-10).
Peter never once blames God for the deaths of Ananias and Sapphira. On the contrary, Peter attributed all healing to God and all sickness to the devil only five chapters later when he said, “How God anointed Jesus of Nazareth with the Holy Ghost and with power: who went about doing good, and healing all that were oppressed of the devil; for God was with him” (Acts 10:38).
Despite these Biblical facts, there have been a number of speculations about Ananias’ death. The most widely held idea is that God personally killed him. Some believe it was an angel that struck him (similar to Herod in Acts 12 – a passage we will examine momentarily), others believe that the devil did it and still others believe that the shock of his sin being exposed caused Ananias to have a heart attack. I believe that it is a combination of the latter two.
Those of us who place Satan as the cause of death believe that the judgment upon Ananias was similar to the standard judgment Paul outlines in 1 Cor. 5:5 which says, “To deliver such an one unto Satan for the destruction of the flesh.” One commentator writes:

(5) Ananias hearing these words fell down.— It is to be noted that St. Peter's words, while they press home the intensity of the guilt, do not contain any formal sentence. In such a case we may rightly trace that union of natural causation and divine purpose which we express in the familiar phrase that speaks of “the visitation of God” as a cause of death. The shame and agony of detection, the horror of conscience not yet dead, were enough to paralyze the powers of life. Retribution is not less a divine act because it comes, through the working of divine laws, as the natural consequence of the sin which draws it down. It was necessary, we may reverently say, that this special form of evil, this worst corruption of the best, should be manifestly condemned on its first appearance by a divine judgment. And we must remember that there is a silence which we may not dare to break as to all but the visible judgment. The dominant apostolic idea of such punishments was that men were delivered to Satan for the destruction of the flesh, that the spirit might be saved in the day of the Lord Jesus (1 Cor. v. 5). St, Peter himself speaks of those who are “judged according to men in the flesh,” who yet “live according to God in the spirit” (1 Pet. iv. 6).3 (Emphasis are mine)

God is not the inflictor of disease and death. God has no pleasure in the death of the wicked but that they should turn and live (Eze. 33:11). As wicked as Ananias and Sapphira were, God had no pleasure in their deaths.

To Learn More, Get our Soon to be Revised Book: 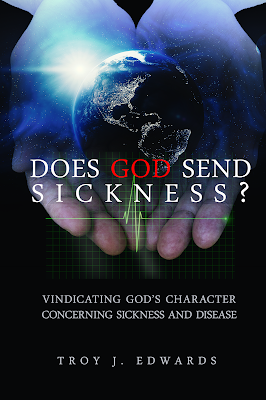